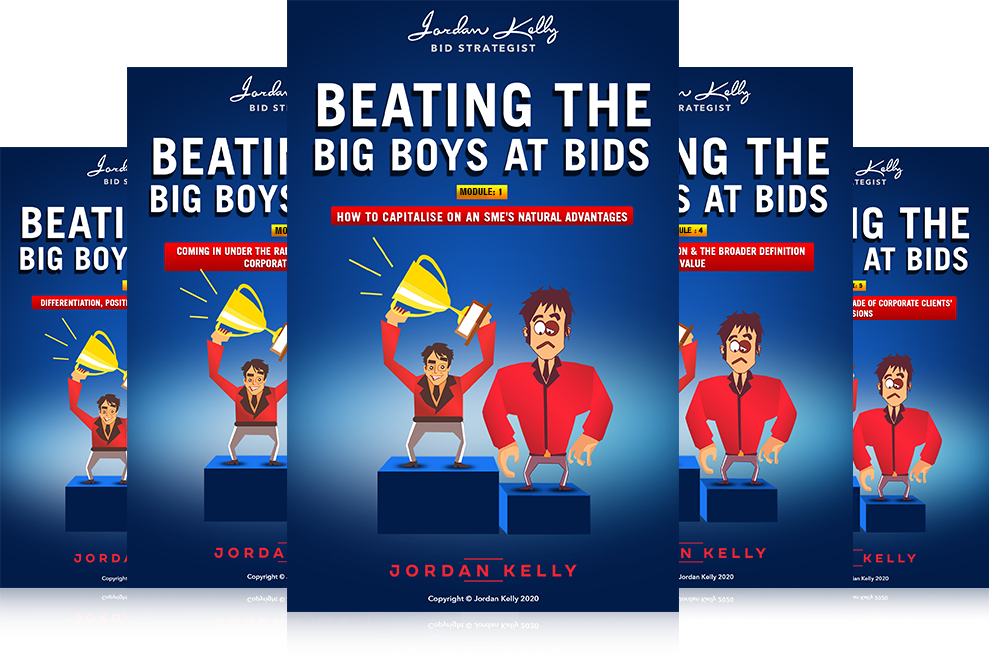 You’re An SME? Capitalise on Your Natural Advantages

This is the first of five commentaries in a very special series especially for SMEs  . . . . that is, for the sake of clarity, Small & Medium-Sized Enterprises(since “SME” also doubles as an acronym for Subject Matter Expert).

Small and Medium-Sized Enterprises have generally been considered to be at multiple forms of disadvantage when tendering for big-ticket Government contracts . . . and particularly in the civil infrastructure space.

Back in the day, marketing academics referred to this as “the IBM Factor” . . . which was a reference to the broader sentiment that “Nobody ever got fired for buying IBM” . . . which, in turn, was a reference to the usually accurate observation that going with the big, well-entrenched names was simply a case of personal career insurance for management and procurement executives.

To a still-significant degree, that mindset remains in place. Of course, it’s politically incorrect of me to say so. But it’s TRUE – and it’s a reality of which many SMEs who are also seasoned bidders, are acutely aware.

I’ve Seen Both Ends of Town – Up Close & Personal

I’ve been involved in the bidding world since 2005 (that is, in an exclusive manner . . . before that I was in general marketing, PR, and also specialised industry intelligence). To take a rough stab at proportions, I’d say that, overall, my client base has represented 25% to 30% SMEs . . . the rest of my client portfolio having been corporates.

So I’ve seen both ends of town – up close and personal. I’ve made observations and formed conclusions that have remained consistent across that entire decade and a half. And many of those conclusions don’t look like changing any time soon.

I’ve also capitalised greatly on these observations to help some small players (organisations that prior, didn’t even register on the “Tier” scale) to take out the biggest names in their industries, and in bids that were the biggest game in town at the time. (Just so you know I’m not making anything up, please see their comments and testimonials in the Clients Debrief section).

In fact, these David vs Goliath challenges are, arguably, my favourite form of bid.

But first, to cover off something that overarches this entire series:  commercial reality and discernment. Notwithstanding the theme of this series, don’t let bravado cloud your judgement.

As part of your assessment as to whether you’re going to enter a bid, make sure you actually do have the smarts, the kit, and the resources to competently and profitably deliver the project, do the job, or service the contract. (That’s an assessment any competent bidder should begin months, if not many months, in advance of the tender documentation being released. No, you don’t yet know what the Evaluation Criteria will be, BUT you can build a reasonable picture of what they are likely to be, and gain a reasonable degree of confidence that you will meet these – or not.

But let’s assume you’ve completed a critical, comprehensive “go or no go” assessment, having paid very careful attention to the competition you’re likely to be up against . . . and that you’re well positioned, well qualified, and sufficiently resourced to deliver the project, contract, product or whatever the subject of the tender is. And by the way, as with almost every article, segment, book, or training product I produce, I’m approaching this from the perspective of non-price criteria . . . that is, I’m working to get you over the line through skills, smarts and strategy on your part . . . not by comprising your profitability.

In this series, I’ll break the topic down into the same five subtopic areas that represent the names of the five Modules in my BEATING THE BIG BOYS AT BIDS training and field guide series.

Capturing & Capitalising On Your Natural Advantages

In this first article of the series, let’s dive into capitalising on an SME’s natural advantages.

The natural SME advantage that’s always stood out for me, most of all, is that employees in most corporations are quite frankly, in my humble opinion, often too far removed from being able to make the connection between the success of that organisation and their own personal pay packets (unless they’re either incentivised sales personnel or they’re pretty close to the C-Suite).

And while the brand of commitment they give to a bid might certainly be worthy, by the same token, it often isn’t anywhere near the very personal degree of dedication that can be seen in the staff of many smaller companies.

I know that there will be listeners from larger organisations that take grave exception to that statement. And if they are an exception to it, so they should. But you get the point I’m making. The BDs and other personnel of smaller organisations usually have a closer relationship with those at the top of the company than do the personnel of larger corporations. As a result, they have a greater feeling of personal investment . . . like their own future is more closely tied to the outcome of a big bid.

If a bidder has done its homework early and well, its frontline operatives will have brought key insights back to base. These insights might well indicate a chasm between the bidder and the buying organisation in any number of areas . . . but these may not be at all insurmountable, if we’re talking about a switched-on, nimble bidder.

Identifying those issues and making the necessary provisions and adjustments can pay dividends both in the bidding process itself, as well as in the level and quality of service that can be convincingly put forward as part of the actual offer.

Still on the note of flexibility and nimbleness: Not only are smaller operators more agile; there are fewer layers of decision-making. Things get done quicker. And problems get solved faster.

A smart bid strategist and a talented writer will find a way to demonstrate that the customer or client organisation won’t be dealing with 17 levels of bureaucracy, layers of paperwork, and three months’ lag time, every time the client needs something done in a slightly different way, or if some part of the arrangement is broken and needs attention.

Position Yourself As A Minimised, Well-Calculated Risk

Indeed, if you can demonstrate that you’re a well-calculated risk and not simply a wild card, the client may well consider a small and manageable degree of risk worth taking, in order to avoid the pain of that sort of slow-moving bureaucracy . . . which can be especially painful if the big players are part of international corporations.

I’m thinking, by way of an ideal example, of smaller players in the Facilities Management space, versus the monolithic, global beasts that dominate the FM industry . . . big ships with no hope of cultural or procedural influence by any but the biggest and most important clients.

Thirdly (and then I’ll leave it at that for this first article in the “Beating the Big Boys At Bids” series), there are fewer links in the chain for critical communications and insights to have to make their way through . . . getting diluted, convoluted, or lost in the process.

That too plays out in both the bid process and in the post-bid, project/product delivery or contract servicing phase. Certainly, a big bidder might have a dedicated business development manager (pre-bid) or a key account representative (post-bid) as the organisation’s frontline operative. But the information he or she channels back into the grid– in a corporate – will often end up being dispersed out around a variety of parties and job descriptions – and through multiple communications channels. By contrast, the frontline operatives of a smaller organisation usually inject that information far more directly into the bid’s knowledge base (pre-bid) and the organisation’s service or delivery team (post-bid).

The trick is not to LOSE that advantage . . . but, instead, to CAPITALISE on it, by making sure you’ve got your production processes and your strategy smarts optimised.

If that’s whet your appetite, that whole line of tuition is added greatly to, and expanded all the way out, in Module 1 of the BEATING THE BIG BOYS AT BIDS training manuals set . . . which, of course, is available right here.