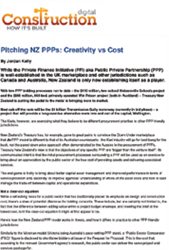 While the Private Finance Initiative (PFI) aka Public Private Partnership (PPP) is well-established in the UK marketplace and other jurisdictions such as Canada and Australia, New Zealand is only now establishing itself as a player.

In a Kiwi PPP, a bidder’s success will depend upon how much value it delivers within this designated “affordability threshold”, with the detail of its proposition left to its own value-adding creativity. By contrast, in the UK, Canada and most states of Australia, bidders are favoured for their ability to beat the “PSC” by as wide a margin as possible, and tender to a heavily-prescribed brief.

While bidders in a “lowest price wins” competition have their challenges, consortia conforming to the New Zealand PPP procurement model are – and will continue to be – faced with some curly questions to which there is not always an answer.